Seaweed. A chemical industry in Brittany, in the past and today.

A class of the lycée de l’Elorn, in Landerneau, Brittany, France, has chosen to discover that ancient, rich and varied industry of seaweed, while dealing with different parts of its curriculum. We present the result of that work in the following pages

Northern Finistère, in Brittany, is not really welknown for its chemical industry. Yet, since the 17th century, that is to say when chemistry started to develop, a chemical industry was carried out, non stop, around seaweed.

The industry of « soda » (sodium carbonate) first developed. This product is extracted from ashes of dried seaweed. It is necessary to make glass and soap. That activity came to an end at the end of the 18th century when new ways were discovered.

It resumed in 1829 after Bernard Courtois, the chemist, had discovered in 1812 a new an useful product in seaweed ashes : iode. It is mainly used in photo-making and medecine. Its production in Brittany stopped in 1952, because of the competition of iodine, extracted from nitrates in Chili.

Today, the extraction of alginates contained in big laminaria has taken over. In 1883, Edward Stanford isolated the algine of seaweed, later Axel Kefting, a Norvegian, extracted algine acid. Its production on a large scale started in 1930. Brittany produces about 2000 tons in its factories in Lannilis and Landerneau. Alginates are thickening and stabilying agents, that are used both in the pharmaceutical industry and food industry, or in that of paper, colouring or moulding products.

The use of seaweed in food, pharmacy or cosmetics is less known., though worthy of interest. Many laboratories in Finistere work in that field for « top quality » products, often meant for export.

The seconde C of the lycée de l’Elorn, in Landerneau, has chosen to discover that ancient, rich and varied industry of seaweed, while dealing with different parts of its curriculum. We present the result of that work in the following pages.

Our work on the seaweed industry 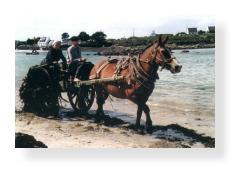 The story of the seaweed industry, that of soda and iodine, is made lively thanks to the museum of seaweed gatherers in Plouguerneau, which supplied us with the ash from ovens, operated for shows during the summer, so as to analyse it.

The « Centre for the Study and Promotion of Seaweed (C.E.V.A) » in Pleubian looks for the properties of seaweed and implements new uses. We contacted them for the food applications (the making of a « flan »)

Today, many factories work on seaweed. It’s the case for DANISCO and TECHNATURE, which agreed to help us.

DANISCO deals with laminar collected in North-Finistere, it’s one of the largest European producers of alginates. We visited the factory. It supplied us with refined alginate of sodium for our experiments.

TECHNATURE packages alginates and other seaweed extracts, to make casting products, cosmetics, or food products. Its customers are in the U.S.A, as well as in Japan, Spain, or France. The company allowed us to test its products and to prepare new ones, following its advice (face creams).

We have divided the form into four groups, each responsible for a part of the work and for the links with one of the companies concerned.

- Seaweed ashes. Analysis, extraction of iodine.(in connection with the museum of the seaweed gatherers)

- Extraction of alginates. (in connection with Danisco company)

- The use of alginates for castings . (with Technature).

- Translations into English ( documentation and reports).

- A video report on our project ( and the making of a poster). 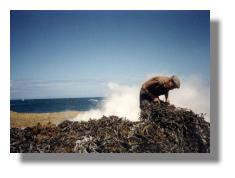 Each year, the museum of seaweed gatherers, in Plouguerneau, on the Northern coast of Finistère organises the burning of seaweed in its old furnaces so as to get ashes with a large amount of soda. We went on the spot, to extract a « soda loaf », in a compact shape. The hot cinders seem to be melting, and are cast in the cells of the furnace, while they are cooling.

The mechanical processing of the ashes :

We first roughly broke the « soda loaf » with a hammer. We, then, crushed the ashes in a mortar with a pestel. Then, we sifted them, to obtain a thin powder.

The washing of the ashes 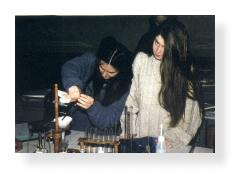 We left to boil 20g of the ashes in 100 cm3 of water for about 5 min. We filtered it. A solid deposit of about 9g was left (weighed after drying). The solution contains soluble substances, mainly carbonate and iodur ions.

The search for carbonate ions

The carbonate ions, CO32- , represent the main active principle of soda and gives it its basic character.(in the present the word « soude » ,in French, refers to sodium hydroxide). 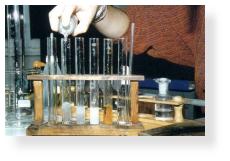 measure of the pH using pH paper and pHmeter : The solution has a pH=11, so that, its basic character is obvious.

Characterisation of the CO32- ions :

(first method) : action of the calcium chlorur. You get a precipitate of insoluble calcium carbonate according to the reaction :

(second method) : action of the concentrate chlohydric acid. You can notice an important emission of carbon dioxide, according to the reaction :

The extraction of iodine

We extracted iodine from the solution, through the action of Hydrogen Peroxide H2O2 in acid surrounding.

Getting the gassy iodine to appear by heating the solution : a light heating lets out purple vapours of iodine. 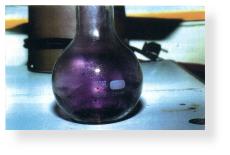 Measuring the iodine : this experiment is part of the curriculum of the 1ere S form, so we asked them to measure the iodine in the solution. The iodine is measured with the thiosulphate of sodium. They found 1,29g of iodine in 100g of ash.

Mr Pasquier, the manager, conducted our guided tour of the factory. Every year the plant (9000 m2 of workshops and laboratories) processes 6000 tons of dried seaweed to produce 3000 tons of alginates.

The alginates supply numerous industries all over the world. Used as binders and thickeners, they can be found in inks, creams, glues, rubbers, toothpastes. As gelling agents they come in useful to make jams, custards, impression powders. These products ar marketed under the brand name SOBALG.

The Danisco firm provided us with a smal quantity of purified alginic acid so that we could study its properties. The danisco manager also explained to us a great length how they extract the alginates from the seaweed.

We conducted that experiment in our scholl laboratory.

We were welcomed by the manager, Mr Le Fur, and the commercial manager, Mr Winckler (today manager of Lessonia). The firm packages the alginates for its different uses : casts, cosmetics, foodstuffs.

The firm has clients all over the world (Euope, the USA, Japan...). The breton products ar renowned for their quality and their purity.

The firm gave us some casting alginates so that we could make a cast.

They also offered us to elaborate a new "beauty mask". We will give more details about these two experiments in the following pages.

How to create a beauty mask

Technature entrusted us with the creation of a beauty mask. It is a new product the company wishes to launch. It’s a product made with tropical fruits, based on casting alginate.

The formula of the « tropical fruit » mask.

First, we tested an alginate mask, with no additive, so as to watch the « casting » effect of that product. We then tried several formulas, by varying the colours and flavours.At last, we tested the resulting cast.

Dilution of the product : Pour the water quickly on the powder. Mix briskly until you get a smooth paste.Important : water must be at 20°C

How to apply it : Apply it immediately over the face, avoid the eyes. It sets after about six minutes.

It takes about 15 mn to use

your skin is finer

Agar-Agar and the formation of colloids

Agar-Agar is a Malaysian word. That product used in Malaysia, was also often used in Japon and the Far East. Agar-Agar comes from various seaweed, in particular from the gelidum species. Those seaweed, after frequent washings, are dried and boiled. The colloid we get is then dehydrated and turned into powder. 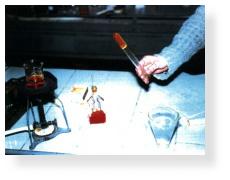 Agar-agar has a stong gelling power. If you add two gramms into a quarter of a litre of water, and boil it for five minutes, you get a hard gel, if tou leave it to cool.

We prepared Agar-Agar colloid, coloured with helianthine. Agar-agar is also used to prepare pudding, but for that we used a seaweed from Brittany, Pioka, which contains carrageenans. 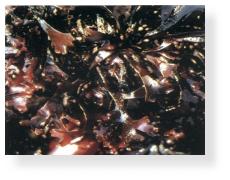 Pioka is the Breton name of a seawweed that is also called sea « lichen ». It is collected at every low tide, its high price attracts seasonal pickers. Its scientific name is chondrus crispus. The active principle extracted from it is made up of carrageenans. It has a real gelling power in milk. In the traditionnal way, it is used by people along the Northern coast of Brittany to make puddings named « flans ».

The préparation of seaweeds.After the gathering of seaweeds, they are spread on the dunes, and dried by often turning them. They can be also washed with fresh water to clear them of salt at various remains. At the end of treatment, the seaweeds are white and dry, and can then be preserved.

Just before use. One can improve the rising process with several soakings ans rinsings. The seaweeds must completely get rid of their « sea » smell.Seaweeds today, in food

A recipe of pioka pudding

We have prepared the recipe of this dessert. It was given to us by an elderly person from the Brignogan area in North-Finistere. She herself had seen her parents make it.

N.B : carrageenans of pioka easily give a gel with milk, it gives no gel with water. For that, on should use the agar-agar we also tested (it is also used for puddings). 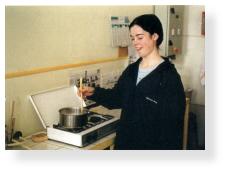 Take a handful of dried seaweeds per quarter of a litre of milk. Rinse them. Make them boil for five minutes stirring them. Filter the hot milk with a strainer or a skimming ladle. Make it boil again for five minutes with the flavour choose, either chocolate or vanilla ( for exemple, three sponfils of Nesquick per quarter of litre of milk). Pour into bowls. Leave it cool and place it into a fridge.

When we started working on this project, we were not aware chemistry had been concerned with seaweed for so long.

We now, know, that here, people make products that are used all over the world.

Our impression is that the chemists who do that work really enjoy it, they extract from nature the best it can offer. The issue will be to increase the stock of seaweed and no doubt to plan its culture.

As far as our school project is concerned, it developed without our knowing it. The theorical study, the search for information, the experiments at the laboratory, the visit of factories, the elaboration of a new product, the test of an old recipe...all that was part of our project.

By writing this project, we intend to keep track of our work. 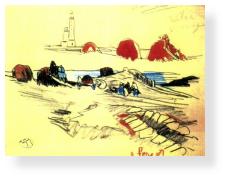